Editorial Update: Since publishing this article, I’ve learned a lot about how words can be misleading when we talk about people living with Alzheimer’s or another dementia. These misunderstandings can lead to inappropriate actions by caregivers and people in general. The word “wandering” implies the person is walking around aimlessly, and therefore, should be controlled. However, they are generally walking with a purpose, just like you and I. Sometimes, they are exploring just like anyone else, and other times they are trying to find a place where they feel safe (this is generally thought of as home). By changing how we interpret their behaviors, we can put more appropriate care into place. 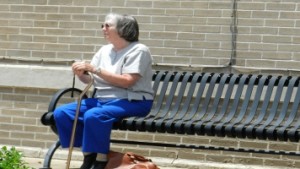 We all see the alerts when someone’s loved one has become lost due to their dementia. I see them practically every day during my ongoing research on Alzheimer’s. While I definitely feel for the families, I’m able to close the article and move on with my day – almost becoming desensitized to their plight. This last week, however, an alert came out in my own neighborhood.

The 72 year old gentleman was last seen at a home no more than 1 mile from my house. By the time the media and neighbors had sorted out the details, he had been missing for 6 hours. Search and rescue was on the scene earlier though.

Looking at a map, I figured he could have gone one of two ways: left towards a busy shopping area or right towards the trails. The area around my neighborhood has several trails which start easy, but become rocky at times. There’s even a large pond surrounded by thick brush and some marsh areas.

Related TinT Article:
Which is Best for Alzheimer’s Care, RF or GPS Technology?

At 4 pm, the 8th hour, I decided to help by hitting the trails because I figured most people wouldn’t look there. I assumed most people would not understand and would expect him to go towards “civilization”. I, however, pictured his past growing up in Iraq, so in my ignorance I assumed in his state of mind the trails may seem more familiar to him. All the while, I realized I was trying to rationalize a non-rational situation.

As I hiked the trails around our neighborhood, I found myself looking in ditches and even the pond. While I wanted to find him, this troubled me. At times I prayed that I would find him. At other times, I prayed that I would not. My mind kept racing with possible scenarios – would he try that trail because he was afraid and lost? Or did he stumble into the marsh?

I’m almost embarrassed to admit that I only searched for two hours. At the end of those two hours, I didn’t know where else to look. As I returned home feeling tired, I also felt guilt and selfishness. After all, here is a 72 year old man lost for 10 hours now. How tired was he? Was he safe?

At home, I reached out to my neighbors for updated details but they didn’t have any new status. I felt lost at what to do. So I kept monitoring my neighborhood’s Facebook page for details. It wasn’t until 8:30 (dark outside) that someone reported him found safe. What a relief! Whew.

Turns out over 12 ½ hours, he traveled about 3 miles. I don’t think he used the trails to get to his location, but he could have. I can’t help but wonder what happened during that time. How did he get there? His family must have been worried sick.

Related TinT Resource:
Wandering and Alzheimer’s Disease: What is it and How Do I Cope?

I’m proud of my neighbors who came together to help in the search, but I can’t help but wonder, do they understand how common this is becoming? Do they realize that next time, it might be their family member?

Have you experienced the fear when someone near you becomes lost? I’d love to hear from you so please share in the comments below:

My name is Mike Good and I created Together in This to help educate all caregivers by providing you with streamlined resources and easy to use tools. I cover general caregiver topics and emphasize solutions for Alzheimer's disease. I  have several friends that are affected by the disease, some of whom don’t remember me from day to day. I have met dozens of caregivers that … END_OF_DOCUMENT_TOKEN_TO_BE_REPLACED